Zimmerhanzel comes to DHS from Samuel V. Champion High School (CHS) in Boerne ISD where he served as varsity football offensive coordinator, head varsity boys and girls track coach, assistant varsity baseball coach and a social studies, health and P.E. teacher. Prior to that, he was at Smithville High School for seven years where he served in various coaching positions. In addition, he taught world geography and economics.

“We are very excited about Coach Zimmerhanzel joining the Davenport Pack,” says Matthew DeLoach, principal of DHS. “We had a number of quality coaches apply for the position, but Coach Zimmerhanzel’s past accomplishments, love for the game and students, and hunger for excellence, caused him to stand out. We are looking forward to seeing the great things he accomplishes, not only on the football field, but with the entire athletic program at Davenport.”

Over the past 15 years of coaching, Zimmerhanzel has received many accolades. As offensive coordinator at CHS, he helped lead the Chargers to two district finals, two regional finals and one state semi-final. He holds an overall record of 63-23 and an average of 43.65 points per game. In addition, Zimmerhanzel has 10 district titles, one regional title and two individual state champions as head track coach. 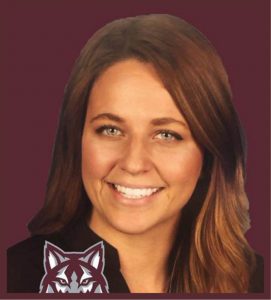 Coach Alyce Peters comes to Davenport as Assistant Athletic Coordinator/Head Volleyball Coach from Veterans Memorial where she took over as Head Volleyball Coach in 2018. In her first year at VMHS she led the team to their first District Championship, as well as, their first regional-quarterfinal appearance. In 2019 Peters took Vets Volleyball to their 2nd playoff appearance with a 25-13 record. The Eagle Volleyball team received District awards for Outstanding Setter 2018 and Outstanding Defensive Player 2019, as well as, Outstanding Hitter 2019 under Peters’ coaching. Before making the jump to high school Peters coached 6 years at the collegiate level. Most recently Coach Peters was Director of Volleyball Operations for Texas Tech University.

Peters went to Texas Tech in 2014, mid-season, after a stint in Europe, playing professionally.

Peters attended college first at Nicholls State, where she played volleyball and ran track,
before graduating from Texas State, in 2009. Peters went on to become a graduate assistant at Angelo State in 2012. During that time, Angelo State rose to a top 10 national ranking in Division II, won its conference, placed second at Regionals and had three players earn All-American honors. Peters earned her Master’s degree in Student Development and Leadership For Higher Education, in 2013. From there, Peters was hired as an assistant coach at Arizona Western College. During her time there, the Matadors climbed to as high as No. 11 in the Division-I Junior College polls, won their conference, district and region. The Matadors also appealed in the NJCAA Volleyball Tournament. 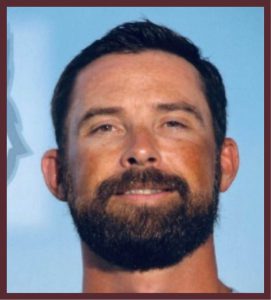 Coach Josh Smith will be starting his 15th year of coaching and teaching this coming fall at Davenport High School. Coach Smith comes to DHS from Alamo Heights High School in San Antonio where he served as the Defensive Coordinator and assistant track coach while teaching U.S. History and CrossFit. Prior to Alamo Heights, he had assistant coaching stops at San Antonio O’Connor, Seguin, and Cedar Hill ISD.

He has been married to his wife Deanna for 13 years. They have two daughters, Ellie(7), and Lyla(4). 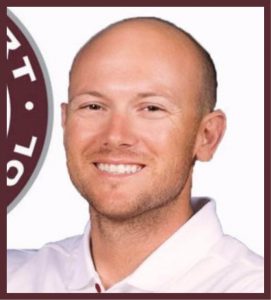 Coach Weisinger is entering his 14th year of coaching overall, and his 1st at Davenport. He is a graduate of Burnet HS and received a B.S. in Mathematics at Texas State University. Dustin also holds a Masters of Education from Lamar University.

Coach Weisinger is married to his beautiful wife Jessica; they have two children, Abigail (5) and Eleanor (3). 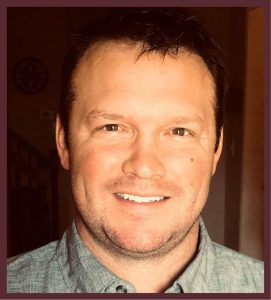 Coach Brandon Davis brings 13 years of coaching and teaching experience to Davenport. Most recently Brandon was the Special Teams Coordinator and Head Track Coach at Northside O’Connor. He played football at Angelo State University with Coach Zimmerhanzel. He and his wife, Erica, have 2 kids, Aubrey, 5, and Asthon, 4. 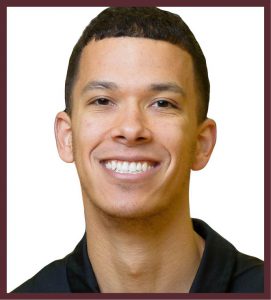 Bradley Washington comes to DHS from John B. Connally High School in Pflugerville ISD where he served as the head boys’ basketball coach and math teacher. Prior to that, he had assistant coaching stops at Georgetown, Leander, Waco Midway, Killeen Elison, and Quitman High Schools where he taught math as well.

He has been married to his wife Marissa for 7 years who is also joining the Wolfpack as an athletic trainer. They have two children, son Jeremiah (5), and daughter Ryan (2). 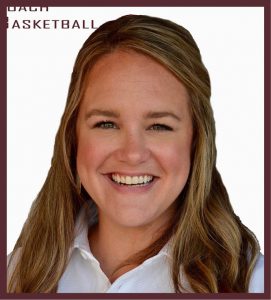 Dru is excited to join Davenport after a fruitful career at LEE HS where she served as the Varsity Girls Basketball coach for the last 8 years. During her time at Lee, Dru turned the program around by earning a playoff berth after a 28 year drought and subsequently leading her team to a District Championship.

As a former 4 year letterman and college basketball player, Dru brings her passion to both the court and classroom every day.

While not at work, Dru can be found spending time with her husband, and one year old son Baker. 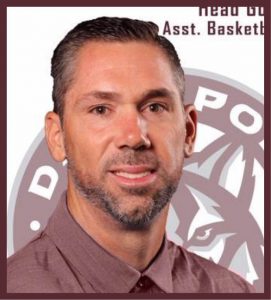 Terrell Johnston will become the Head Golf Coach and an assistant on the Boys Basketball Staff at Davenport High School.

Terrell comes to Davenport from Hays High School where he was the Head Boys & Girls Golf Coach. This will be his 5th year as a head golf coach, with 4 more years of experience as an assistant. Coach Johnston also has 13 years of experience coaching boys’ basketball, both as a head coach and as an assistant. Coach Johnston is a college graduate of Angelo State University, where he was a scholarship player on the Men’s Basketball team.

Coach Johnston is married to Amber, and they have 2 daughters, Kendall (9 years old) and Harlow (10 months). 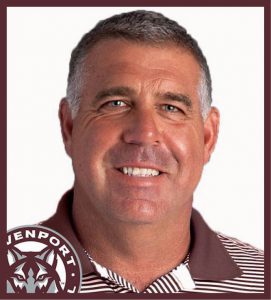 Coach Mckinley was in private business for over 20 years and will begin his seventh year as a coach and teacher this year at Davenport High School. 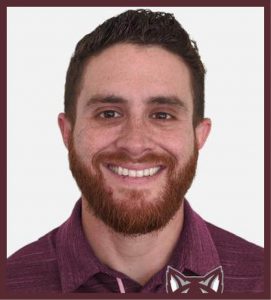 Paul Steinhoff is the Head Athletic Trainer at Davenport High School. Paul is a graduate of Texas State University. He will be entering his eleventh year in Comal ISD and his twelfth year as an athletic trainer.

Paul is a nationally certified and state licensed trainer. He is also a member and past president of the Alamo Area Athletic Trainers’ Association. Paul and his wife, Katie, who is also a former Texas State Bobcat, live in San Antonio with their two daughters, Noelle and Ami. 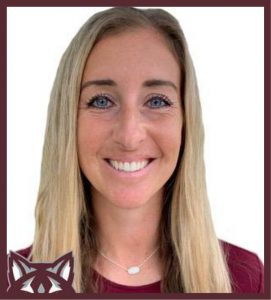 Marissa Washington comes to DHS from East View High School in Georgetown ISD where she served as one of the Athletic Trainers and taught Sports Medicine for 8 years. She had previous stops at Quitman and Rockwall High School.

She was born and raised in San Diego, CA and loves being outdoors running, playing sports, and keeping up with her kids.

She has been married to her husband Bradley for 7 years who is also joining the Wolfpack as the Head Boys’ Basketball Coach. They have two children, son Jeremiah (5), and daughter Ryan (2). 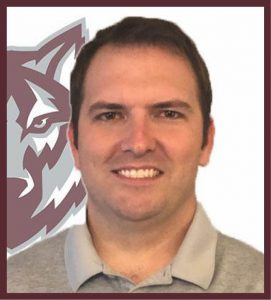 Coach Steven Davis has 10 years of experience teaching math and coaching many sports.

A 2006 graduate of Canyon HS, he is excited to be back home in Comal ISD. He has a BS in Mathematics from Texas State University. Most recently, Steven taught Algebra I and coached football and wrestling at Judson HS.

He and his wife, Allison, have an almost 2 year old son, Nolan. 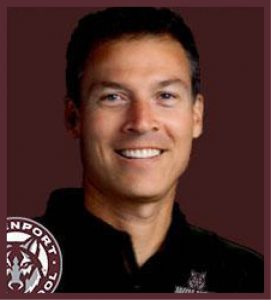 He and his wife, Heidi, a former scholarship swimmer at Oregon State University, were also co-head coaches of the year-round Penguin Swim Team in Grass Valley, CA. Kirkpatrick has also recently served as head coach of the Grass Valley Orcas, a local
summer league team.

Kirkpatrick received a B.A. in German and a B.A in history at Santa Clara University and has 20 years of teaching experience in German, social studies (including AP World History), and English. His wife will be joining the Davenport Athletic Department as an
administrative assistant and their son Kellen (14), daughter Kara (12) and daughter Katelynn (5) are all looking forward to joining the Wolfpack. 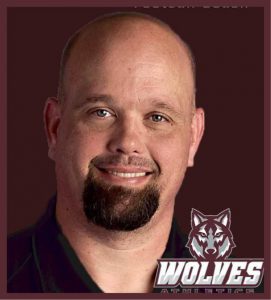 Barrett Matthews comes to us from San Marcos Academy and has been coaching and teaching for the past 12 years. Barrett has a Masters of Science in Biochemistry from Texas State University.

Barrett has coached many different sports while at the San Marcos Academy. The majority of his coaching experience is in Football and Track. 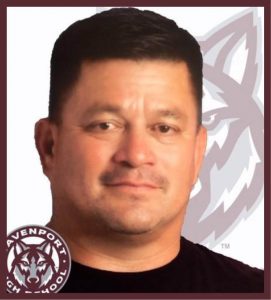 Jesse Martinez is a graduate from Southwest Texas State in 1992. He has spent time in Kenedy, Spring, Southwest and Clemens High Schools. He was the head Sir Is Soccer coach at Clemens for seven years where they were able to make the playoffs his last two years; district champs his last year. He left Clemens to get a job that would allow him to spend more time with family and was lucky enough to find a home at Canyon.

Jesse Martinez leaves a great group of people at Canyon High School where he has been for the last 14 years. He assisted with the Girls and Boys soccer programs as JV coach and helped with the Varsity. For four years he coached the kickers/punters for the football program. Coach Martinez has taught Geography, Psychology, Sociology, Government, Economics but loves that challenge of U.S History. He also spent the last three years as Canyon’s Social Studies Department Head and U.S History team lead.

Coach Martinez spends his off time in the company of his lovely wife Tina. They share the joy of having raised their children, Jacob, who attends the United States Naval Academy, and Jackie, who will be attending Stephen F Austin in the fall. 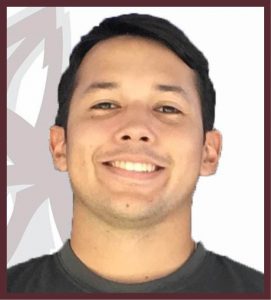 Coach Ben Morrison will begin his 3rd year of coaching and teaching this fall at Davenport High School. Coach Morrison comes to Davenport from Connally High School in Waco, Texas where he served as the Head Boy’s Soccer Coach and Assistant Cross Country Coach while teaching Spanish.

Coach Morrison was the Assistant Boy’s and Girl’s Soccer Coach in his first year before being promoted to Head Boy’s Soccer Coach. In his first year as head coach, the team broke records for most wins and most goals scored in program history. In his lone season as head coach at Connally, he led the Cadets to their first playoff berth in program history, and was also honored as the All-District Coach of the Year.

Coach Morrison will join the Wolves staff as the Head Cross Country Coach and the Head Girl’s Soccer Coach. 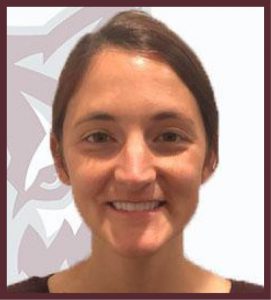 Megan began her career as the Assistant Women’s Soccer Coach at Texas Lutheran University in Seguin, Texas. She was also the boys and girl’s soccer coach at Canyon Middle School for four years while teaching English. She also coached cross country for two years. After four years at the middle school, she transitioned to Canyon High School teaching English I and II and served as the Girl’s Assistant Soccer Coach for one year.

Megan graduated from Angelo State University where she played college soccer all four years. While not at work, Megan enjoys reading and spending time with her family.